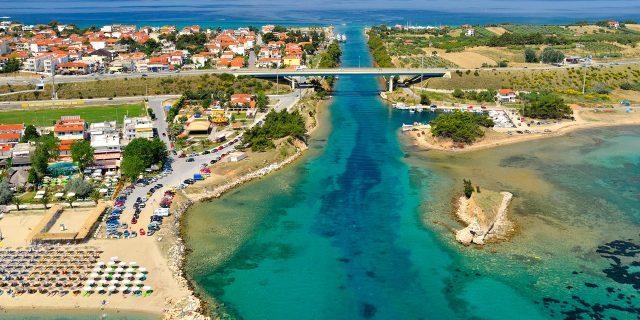 Halkidiki is a multi-faceted area with a diverse range of sceneries. The peninsula is known for its extensive coasts, but it is also home to the Holomondos Mountains, which shape the peninsula’s middle north and provide a stunning environment. Forests and a diverse flora, along with the pristine waters of the Aegean Sea, result in a pervasive blue and green colour scheme.

Each area in Halkidiki Greece has its own representation, which includes a presentation of each community, its scenic attractions, emergency contacts, housing guidelines, culinary facilities, local services, hiking routes, and information regarding local leisure activities.

Chalkidiki is a peninsula in Northern Greece’s Macedonia region, bordered by the Northern Aegean Sea. The peninsula consists of a large territory in the northwest that leads to three elongate peninsulas in the south: Kassandra, Sithonia, and Athos.

Halkidiki is also known as the ‘Trident of Poseidon’ because of its form, which is based on Greek mythology. Polygyros, the administrative centre of Halkidiki, is a settlement in the backcountry that is strategically positioned.

How to get to Halkidiki

By airplane: The International Airport “MACEDONIA” of Thessaloniki (IATA code: SKG) which is the airport that serves Halkidiki connects the region with approximately 41 countries and 81 destinations with direct flights, as well as 35 cities and islands in Greece (direct flights and transit).

For more information, visit the website of the Airport: www.skg-airport.gr

Taxis and busses take you from the airport to the Coach Station of Halkidiki (KTEL) in Thessaloniki. There you can take the coach to reach the destination of your choice.

For more information, visit the website of Station of Halkidiki (KTEL)

By car: The Egnatia Motorway (Egnatia Odos), which crosses Greece from its westernmost edge -Italy (Igoumenitsa)- to its easternmost borders with Turkey (Kipi, Evros), is a modern motorway of international standards, equipped with devices and safety systems that aim at protecting and helping the motorists. Egnatia Odos meets the Ring Road of Thessaloniki which leads to the National Road towards Halkidiki.

Following the strict government measures, our villa is equipped  with the most effective disinfectant tools and cleaning products.

Our properly trained staff and ourselves are fully vaccinated (3 doses) and ready to provide you a safe and pleasant accommodation.